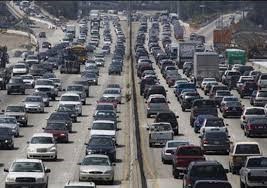 The Clean Air Act was created to respond to the ever-increasing air pollution that has come from industrial expansion and a reliance on fossil fuels for energy and transportation. Automobiles are a major source of air pollution (e.g. hydrocarbons, nitrogen oxides and carbon monoxide). It is estimated that road traffic accounts for about 40 percent of the pollution that contributes to ground-level ozone (the main ingredient in smog).

Single occupancy vehicles have long dominated the roadways, especially for commuters. In an effort to reduce pollution, states, like Massachusetts, have adopted Rideshare Programs. Ridesharing is the sharing of vehicles by passengers to reduce vehicle trips, traffic congestion and automobile emissions. Ridesharing (carpooling, vanpooling, public transport), as well as bicycle commuting and walking, are all goals of these programs.

Locally, the idea has been for Massachusetts Department of Environmental Protection (MassDEP) to work with large employers (with more than 1,000 employees) to promote commuting options. The program depends on corporate surveys of worker commuter patterns, providing a menu of commuting options, offering incentives, and documenting the resulting annual changes in patterns, hopefully to successfully meet a specific performance goal of reducing by 25 percent the number of times commuters drive alone to work.

Unfortunately, for various reasons, these programs have had limited success, but continue to burden the employer with annual compliance costs. Part of the problem has always been the difficulty of organizing car-pooling and the uncertainties due to the drivers’ and passengers’ daily schedules.

We are all getting accustomed to technology searching for logistical problems to solve. The ridesharing conundrum is one of those problems and “real-time ridesharing” are the solutions beginning to be provided by Transportation Network Companies, such as Lyft,  Uber and Sidecar. These companies, with their mobile apps, arrange one-time rides on an on-demand basis.

Both Lyft (Lyft Line) and Uber have now introduced a carpooling service in Boston. Passengers along a route get in the car at a price cheaper than the ride-for-hire alternative. The trip has to maintain its original route as it picks up other customers, who have to be ready immediately to get in the car when it arrives for them.

Although this service is currently limited to the Boston/Cambridge market, there is no question that an expansion of this service into the suburban market is inevitable.

It is also not very difficult to foresee an app that allows single occupancy drivers to easily connect with fellow commuters heading in the same direction, on a ride by ride basis. With no long-term commitments and many scheduling alternatives available, it seems like an easy fix. Yeah, we’ve got an app for that!

This article originally appeared in the online CommonWealth Magazine.
The below version includes post-election updated information.

By most accounts, the Patrick 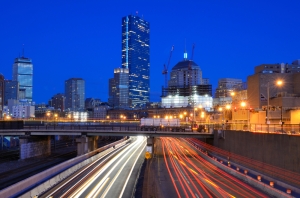 administration and the Legislature have moved the needle forward on the issue of transportation. They know that investing in transportation infrastructure is critical to our state’s economy, quality of life and industrial competitiveness.

However, many aspects of the Commonwealth’s transportation system have already approached capacity constraints with increasing delays on congested highways and transit systems. At the same time, demand has increased and is predicted to continue over the coming years with no major increases in capacity coming soon. Without additional investments in our infrastructure, further declining services, increased travel times, and a degraded environment will be the future of the Massachusetts transportation system.

In 1970, Governor Frank Sargent created the Boston Transportation Planning Review that analyzed and redesigned the entire area-wide transit and highway system. It provided a blueprint for transportation policy and investment that we have been effectively following for the last 40 years.

Unfortunately, the funding that was put in place fell short of what is needed to truly meet the existing and future transportation needs of the Commonwealth’s residents and businesses. What has been missing from the conversation of late is visionary thinking and a more expansive understanding of why investments in transportation are so important to the future of our state. With one of the highest housing costs in the nation, a solid transportation network that can expand access to a larger and more affordable housing market is critical to the success of our economic development centers.

Across the country – from the Research Triangle in North Carolina to the Texas Medical Center in Houston – state governments and private industry are investing in systems and incentives designed to replicate the Commonwealth’s innovation economy. Though Massachusetts has strengths in higher education, strong academic medical centers, and a historic commitment to innovative technologies, transit and access are weak links and a potential liability for recruiting and retaining a qualified workforce – and the companies that create those jobs.

As Governor-elect Baker begins to outline the issues that will be critical for the next four years, we assert that a top priority should be the establishment of a new long-range statewide visioning and planning effort for transportation. This will require strong leadership to take the bold steps necessary to establish a vision and make it a reality. To successfully implement such an initiative, we’d propose a few guidelines:

• Connectivity is key: With several strong innovation, life science, and health care clusters that are major economic engines for Massachusetts, creating a reliable network of roads and transit is necessary for improving the flow of ideas and people.

• Out-of-the-box thinking is vital: Aligning transportation programs with energy and environmental goals, focusing on seamless connections between air and rail, bus and subway, and making transportation information an integral part of our hand-held knowledge system are all planning efforts that can begin early in a governor’s term and be implemented over the next decades.

• Embracing multiple modes of transportation and access is essential: A 21st century statewide plan must include not only roads, bridges, and public transit, but also bicycle and pedestrian needs, as well as enhanced information sharing through technology.

• Public private partnerships can extend the reach: Innovative partnerships between the public and private sectors must be part of a long-term plan that addresses the needs of businesses and residents alike.

Long-term planning and continued investments in a modern, integrated, multi-modal network are critical to our global competitiveness. Massachusetts cannot lose out to those states that know that transportation investment equals economic growth.

David Begelfer is CEO of NAIOP, the commercial real estate development association, and Marilyn Swartz-Lloyd is CEO of MASCO.