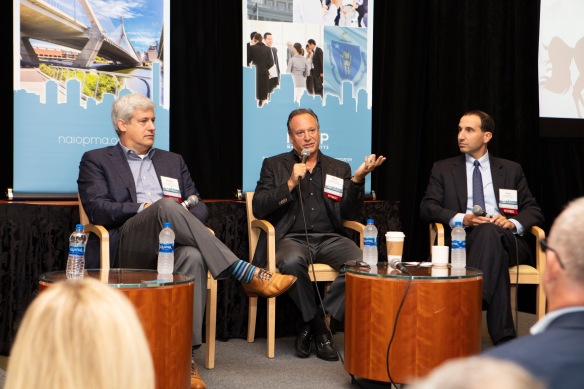 The developers of three of Boston’s most changed neighborhoods, Fenway, Assembly Row, and Seaport Square came together last week for NAIOP’s panel discussion, Development Unicorns. If the catchy title didn’t grab your attention the insight provided by these forward-thinking developers certainly will. The event opened with a keynote from David P. Manfredi, Elkus Manfredi Architects, that highlighted the 8 Place Making Principles these neighborhoods have in common.  Mr. Manfredi also spoke about the important changes at work in each of these neighborhoods; public investment in infrastructure, skillful placemaking, flexibility and evolution along with density and walkability.  While the architecture of each area is different they all share these characteristics which have played a large role in the success of the projects.

After Mr. Manfredi’s introduction, the expert panel took the stage moderated by Sara Cassidy of AEW Capital Management.  Representing Federal Realty Investment Trust, the minds behind Assembly Row, was Donald Briggs, Executive VP of Development. Mr. Briggs mentioned that as a realty investment trust Federal Realty had the large balance sheet to a take risk on a piece of land in Somerville that had been tied up in a 6-year lawsuit.  He also discussed how the Assembly Row site is much closer to Boston than many people originally realized making it a great location for a development opportunity.

Steve Samuels, Chairman & Principal at Samuels & Associates discussed how his company “stumbled” into the Fenway neighborhood as it was being held hostage by Fenway Park.  His team had to convince people one use at a time to come to Fenway for something other than baseball. The final panelist was Yanni Tsipis, Senior VP-Seaport at WS Development.  WS has been involved in the Seaport since 2006 when it was just a wide open lot with great water views. Mr. Tsipis noted this blank slate provided an interesting opportunity for the development team and once momentum swung in their direction his team decided to triple down and buy out their remaining partners in the Seaport Square area.

The developers had their own story to tell on how the pieces of each neighborhood came together.  The Fenway, Mr. Samuels mentioned, was already a great neighborhood but it had no core. His team worked to build relationships with stakeholders in the area and then began to buy up lots one at a time.  They then rezoned each lot, again piece by piece, leading to a very slow process. Assembly Row also started off slow, as Federal Realty stepped into a deal that had been stalled with that 6-year lawsuit.  However, settling the lawsuit did have a positive outcome as Mr. Briggs pointed out, it pushed his team into embracing office space. Although not part of their original plans the offices turned out to be a very positive driver of growth.  In the Seaport it was very important for WS Development to ensure the area developed a sense of place very early on in the process. As Mr. Tsipis pointed out the neighborhood is still growing, with only about ⅓ of the planned construction now complete.

Other key points echoed across the panel were the importance of responsiveness to the market and also ensuring public realms and first floor retails spaces are unique and inviting to the neighborhood. Mr. Briggs suggested it is always prudent to entitle more square footage which allows for flexibility and optionality.  Federal Realty sacrificed density at the beginning of their project to build on a horizontal context and are now moving to build high rise projects. In the Fenway, The Samuels team had to find the right balance between old and new architecture.  Ultimately their goal for the area is to be ⅓ office, ⅓ residential, ⅓ retail but as Mr. Samuels quickly mentioned the market will drive these decisions.

In Seaport Square, WS has devoted time and energy to planning the public spaces and also programming around these areas as these events organically bring people together.  Mr. Briggs agreed, pointing out that he believes creating fabric in architecture, space between buildings is more important than buildings themselves.

When discussing retail spaces all agreed it was most important to get the first floor spaces right to command a premium above. With the continued success of these three neighborhoods, the insights from the panel were certainly valuable as the city’s development boom continues.