This post originally appeared on the Solomon McCown & Company blog. It was authored by Michelle Cassidy. 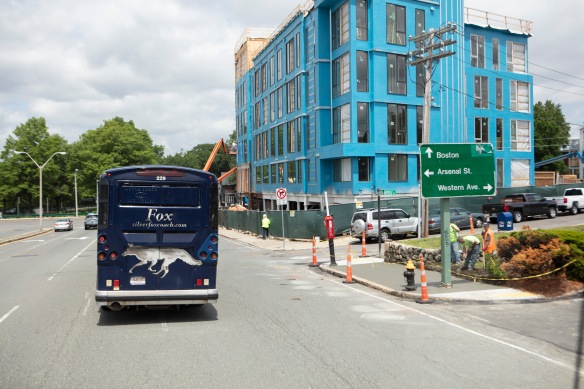 We recently had the pleasure of attending NAIOP’s annual, highly anticipated event: The Bus Tour. This year’s theme – “Then, Now, Next” – offered a glimpse into some of Boston’s most transformative developments in the city’s evolving and historically booming neighborhoods.

We journeyed from the Financial / Central Business District to the Seaport to South Boston / Dorchester. Then, we drove through the Back Bay / South End, before reaching the Fenway followed by our final stop in Allston / Brighton.

Each neighborhood provided a look into Boston’s past while highlighting its promising future. Many buildings that were originally constructed for industrial uses are being repositioned for today’s needs. Here’s a rundown of key takeaways:

Financial / CBD – While highlighting the beautiful renovation of One Post Office Square’s lobby, speakers emphasized that tenants are now moving to better brand themselves and attract / retain talent, whereas historically they were driven by cost. The lobby renovation enables substantial natural light to enter the building and complements the streetscape. Anchor Lines Partners / JLL are renovating the building’s other interiors – we love their flexible fitness floor concept which will provide tenants with a healthy lifestyle at their fingertips.

Eastern Seaport – Given Kendall Square’s limited space, there is a lot of potential for new lab and R & D space in the Seaport, particularly the Drydock area and Raymond L. Flynn Marine Park. Many industrial buildings such as the Innovation and Design Building and 451 D St. are being repositioned for innovative tech or life science companies. The successful mixed-use development along Seaport Boulevard is continuing into this area too. Parcel K, developed by Lincoln Property Co. and designed by Arrowstreet, will bring additional residences, a Hyatt Place hotel and 20,000 square feet of retail and restaurant space. The new Omni hotel, developed by Davis Companies, will also bring more keys, collaborative workspaces and luxury spaces such as a pool deck with views of the Harbor.

South Boston – Redgate and HILCO’s development of The Edison Power Plant is improving the connectivity between the Seaport and South Boston. The 2.1 million-square-foot development includes seven new buildings that consists of more than 1,000 apartments and condos, a 150-room hotel, 339,000 square feet of office space and 68,000 square feet of retail. Investors are taking note of visionary projects such as this and pursuing unique opportunities here; for example, Akelius, the largest listed company in Sweden, recently purchased the Carson Tower Apartments near Carson Beach.

Dorchester – Nordblom is repositioning the former Boston Globe headquarters into ‘The Beat’ (The Boston Exchange for Accelerated Technology). The team is transforming the space into a modern gem with high ceilings, two roof decks, a food hall and a possible brew pub. The space will have the ability to suit various tenants including flex tech, autonomous vehicles and robotics.

The Fenway – Given the booming Longwood Medical area, there is high demand for housing in this area, and Skanska’s recently delivered The Harlo, a luxury residential building with fabulous amenities and ground-floor retail speaks to that demand. There’s also commercial office development – the tour stopped at 401 Park, commonly known as Landmark Center. The building, which was originally a Sears’ manufacturing plant, is being repositioned by Samuels & Associates into an impressive mixed-use development with a million square feet of lab and office space, a coveted ‘Time Out’ food hall, and a 1.1-acre public park with retail and activities.

Allston/Brighton – Our last stop was at Boston Landing, a 1.9 million square foot mixed-use development by HYM and NB Development Group. We toured the luxury apartment building, Lantera, which includes impressive amenity spaces including a pool and roof deck. The interiors, designed and decorated by Elkus Manfredi Architects, are full of beautiful, vibrant colors and are definitely worth checking out. The development is also proximate to public transit. Now that the Boston Landing train station is completed, it’s easy to get to and from the heart of Boston to this area. The station, constructed by Skanska, is built to Envision® Silver verification. To date, this is the highest level awarded in Greater Boston and the first transit project in New England to achieve Envision.

Connectivity continues to improve throughout Greater Boston thanks to the transformative developments and renovations we visited on the Bus Tour. We’re excited for all these projects to deliver and to bring additional vitality to the neighborhoods in which they are located.