The following blog post was submitted by David Fleming, Principal at PACE Communications Group, a marketing and PR firm that specializes in commercial real estate and retail. 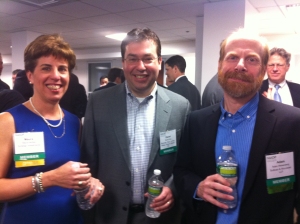 “Wherever [coffee] is grown, sold, brewed, and consumed, there will be lively controversy, strong opinions, and good conversation.”
Mark Pendergrast, Uncommon Grounds: The History of Coffee and How It Transformed Our World

More than 100 people gathered on May 14th in Boston at Synergy Investments for NAIOP’s Coffee with Colleagues, a networking breakfast event. The sold out gathering was held at Synergy’s new corporate headquarters inside the 100 Franklin Street building, which Synergy owns. In addition to 100 Franklin, Synergy’s commercial real estate portfolio contains some of downtown Boston’s landmark buildings including 250 and 253 Summer Street, 211 Congress Street, and 185 Dartmouth Street, among others.

Steve Brodsky, Synergy’s Chief Operating Officer, stated that the event went well. “We were pleased to see the strong turnout, and it was a great networking event,” said Brodsky. “It was a terrific way to celebrate our one-year anniversary in our new space here at 100 Franklin Street, while working with NAIOP in support of the industry.”

Others commented positively about Coffee with Colleagues:

Dorrian Cohen Fragola, VP Marketing and Business Development, Janitronics: “This morning’s event was a wonderful opportunity to network, reconnect, and meet new people. Synergy has been so active in Boston recently. It was good to hear more about its plans and meet some of its people,” said Cohen Fragola. “Thanks to Synergy for hosting and to NAIOP for another successful event.”

Joel Loitherstein, P.E; Associate, Tata & Howard: “Coffee with Colleagues was well worth the trip into Boston. These events are a great way to meet new people and reestablish connections with past clients and colleagues. The atmosphere is very comfortable and you get a chance to meet senior level people at major development, legal, and consulting firms in the Boston area.”

Coming Up: Boston’s Other Waterfront

On May 22, don’t miss another exciting NAIOP event: Boston’s Other Waterfront featuring Joseph Shea, Kairos Shen, and Peter Spellios. Beyond the Seaport District, the panel will discuss the future of Boston’s waterfront from Lovejoy Wharf to East Boston, and beyond. It’s sure to be a good one!

To see other events NAIOP has in store, visit the Upcoming Events page. See you at the next great NAIOP event!