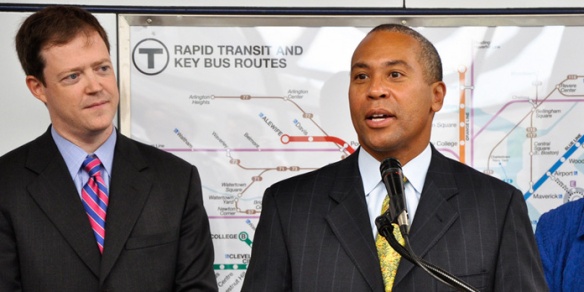 Transportation Secretary Richard Davey and Governor Deval Patrick recently unveiled the Administration’s 21st Century Transportation Plan.  This statewide plan would add $10 billion over the next 10 years to the state’s investments in roads, bridges, and transit – including critical upgrades to the existing system and expansion through select, high priority projects.

The plan calls for:

The cost for all of this is about $1 billion per year over 10 years to get a modern, convenient transportation network to enable sustained economic growth across the Commonwealth.

I just returned from a trip to Korea and saw a truly modern, extensive, and reliable transit system.  Like Korea, the Massachusetts economy is fueled by a highly skilled mobile workforce, but without a first class transportation system, businesses will not be able to continue to grow.

Now is the time for all of us to get together and support these necessary investments.  There will be much debate on how to pay for all of this and the Governor will soon propose a menu of revenue options tapping a multitude of taxes and fees.  While discussion of these revenue sources is needed, it is critical that we move forward to ensure continued economic growth.  The time is now. Inaction is not an option.