With the YMCA’s decision to pull the plug on their Boston Greenway site, the dream of non-profit institutional involvement to activate this vast swath of open space finally comes to an end. It all sounded quite optimistic a few years ago, but reality dashed those early hopes.  Although the groups that sought these sites were quite different, they all failed for some similar reasons – some within their control, but others well outside their influence. 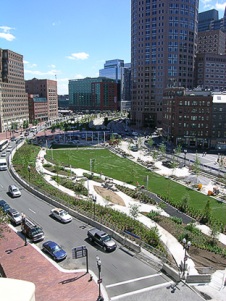 Most of the proponents developed their concepts at a very different time – a bull market economy.  There was a sense that endless funding would be readily available from “flush” donors. Therefore, the plans were grand and the prospects of success seemingly assured.  But even without the financial crash, there were far too many institutional capital campaigns already in the works (universities, hospitals, and cultural/arts) to allow these new projects any realistic hope of being funded, no matter how strong Greater Boston’s philanthropic community. The recession killed off all but those campaigns that were in their last phases (e.g. MFA.), leaving the Greenway projects out in the cold.

Another problem was that the state basically ran out of money on the Big Dig.  That meant that some aspects of the project suffered.  In particular, the ramps now stand out as an orphan in search of a benefactor.  The costs to cover the ramps and fully deliver a seamless parkland were too expensive for the Turnpike, so the costs were transferred to eager non-profits who were looking for downtown sites.  Unfortunately, these groups had no idea as to the ultimate premiums they would be forced to absorb.  At one point, the Turnpike actually hoped they might even be paid for the rights to develop these “challenged” sites. Now the state has to accept that these open sores will most likely remain for the foreseeable future.

Finally, we are all left with a serious problem.  Open space is simply not sufficient to attract the public to activate this long stretch of parkland.  On any given day during the summer, it is rare to see the area stretching from China Town to the Zakim Bridge used anywhere close to the extent of other city parks.

We may not be able to attract institutional interest to the Greenway any time soon, but we must to work to find a way to make this civic space as usable and attractive as our Emerald Necklace.  Readers – what do you suggest?